Do you recognise men suspected of £1,500 cashmere theft?

The men are believed to be from the Brighton area although the theft took place from a shop in Chichester in April. 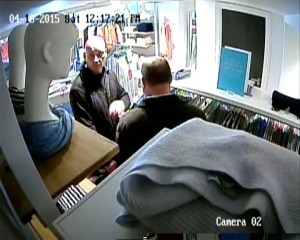 The force said: “Police in Chichester have published a photo of two men suspected of stealing valuable sweaters from a city centre shop.

“Just after midday on Saturday 18 April the pair stole 13 cashmere jumpers worth a total of £1,500 from Pure Collection, in North Street, Chichester.

“They are both described as white and in their late fifties. One is shaven headed and the other is balding with dark grey hair.”

PC Jimmy Upton said: “We believe the suspects are from the Brighton area. If anyone has any information, please contact us.”

Anyone who recognises the men is asked to phone Sussex Police on 101, email 101@sussex.pnn.police.uk or call the independent charity Crimestoppers anonymously on 0800 555111.