About a hundred people gathered to remember a veteran of Waterloo in a Hove churchyard on the 200th anniversary of the Battle.

They took part in a service of remembrance outside St Andrew’s Church, in Church Road, Hove, where Lieutenant-General James Webber Smith is buried.

The service was conducted by the Reverend Dan Henderson, the associate vicar at St Andrew’s, and the Reverend Giles Allen, the regimental chaplain of 7th Parachute Regiment Royal Horse Artillery.

Wreaths were laid by Deputy Lieutenant Jim May, High Sheriff Juliet Smith, the Mayor of Brighton and Hove Lynda Hyde, representatives of the Royal Regiment of Artillery and the Royal British Legion and children from St Andrew’s Church of England Primary School. 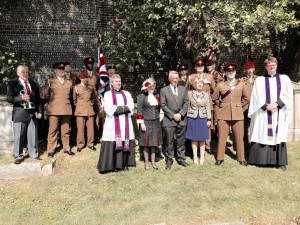 In his introduction to the service, on Thursday (18 June), Mr Henderson said: “On this day, the 200th anniversary of the Battle of Waterloo, we commit ourselves to work in penitence and faith for reconciliation between the nations that all people may, together, live in freedom, justice and peace.

“We pray for the people and nations of Europe that, remembering the Battle of Waterloo, we may promote that which brings us together and celebrate the common life we share.

“We pray for all who in bereavement, disability and pain continue to suffer the consequences of fighting and terror.

“We remember today with thanksgiving and sorrow those whose lives were given and taken away during the Battle of Waterloo. We remember especially Lieutenant-General James Webber Smith who served in the battle.”