Rockinghorse ball raises more than £100,000 in one night

A Mid Summer Ball in Brighton has raised more than £100,000 to help sick children and disadvantaged and vulnerable young people.

The event took place at the Hilton Brighton Metropole on Saturday night (20 June) and raised £106,000.

The money will support the Rockinghorse children’s charity and the DM Thomas Foundation for Young People. 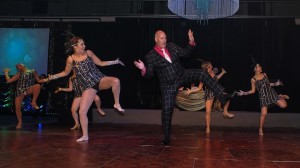 Accountancy boss Barry Carden, who runs Cardens, in Hove, won the competition in front of a judging panel headed by Zoe Ball.

She has appeared on Strictly Come Dancing on BBC TV and hosted its spin-off show It Takes Two.

The others taking part in the dance-off were Brighton i360 chief executive Eleanor Harris and the radio presenters Nicola Hume and Tom Evans who co-host the Heart Sussex Breakfast Show.

One of the fundraising highlights of the evening was an auction which brought in £40,000, including £8,000 for a bespoke meal for 10 people by Gingerman restaurant founder Ben McKellar.

The ball was sponsored by Hove financial adviser Skerritts.

Rockinghorse chief executive Ryan Heal told guests: “The reason fundraising events like tonight are so important is that we are as relevant and as needed in 2015 as we were back in 1967.”

The charity was founded in 1967 and supports the Royal Alexandra Children’s Hospital and the Trevor Mann Baby Unit. 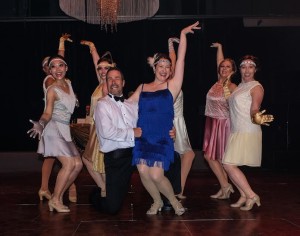 David Samuel, from Paddle Round the Pier, with i360 chief executive Eleanor Harris at the Rockinghorse Mid Summer Ball in Brighton

Mr Heal said: “All of the money raised for Rockinghorse tonight will be going straight to the Trevor Mann Baby Unit right here in Brighton to continue our work and to support our ongoing projects on the unit.

“As the late great Trevor Mann said himself: ‘We can’t stop children getting sick but, with your help, we can make them get better.’”

Rockinghorse supporter and parent Becci Edmonson also spoke at the event, talking about her personal experience at the Trevor Mann Baby Unit.

She spent 117 days there after the premature birth of her son Wilf. She said: “We know that Wilf simply wouldn’t be here without the amazing care and support that he received in the Trevor Mann Baby Unit and the specialist equipment purchased by Rockinghorse.

“All the money raised really is put to good use making the experience of families like ours as positive as possible.”

To find out more about Rockinghorse and the work that they do to support sick children and their families in Sussex, visit www.rockinghorse.org.uk.

To find out more about the DM Thomas Foundation for Young People and the work they do across in Brighton and across the country, visit www.dmthomasfoundation.org.