An aspiring Brighton comedian has his sights set on a career in comedy after beating 100 other hopefuls in a new competition. 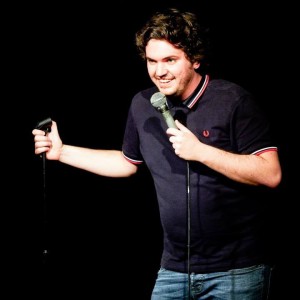 Joe Foster, 25, was crowned the second ever South Coast Comedian of the Year last week, winning £400 and a slot at a professional gig.

The contest, sponsored by Fosters (no relation), was open to comedians from Southampton to Kent, who are gradually knocked out over nine heats from February to May, with five left to battle it out in the final on Thursday.

Joe, who grew up in the Queen’s Park area of Brighton and went to Cardinal Newman school, said: “I entered last year but was knocked out in the heats.

“I thought I might as well try again and see what happens. I’ve been doing a lot more gigs, my material’s better and I know my way around a gig, and how to work with all the different variables, like the shape of the room and the height of the stage.

“I’ve been doing stand up for four years, and for the first three years I did the same stuff, just trying to build up to 10-15 good minutes.

“Around November, I started putting new material into the middle, not worrying so much about how each gig is going to go, but building up more material.”

He’s now hoping to use the slot at a professional gig, which will be held later this year at the Spinnaker Tower Comedy Club in Portsmouth, as a springboard to future success.

And he’s also teaming up with the winner of last year’s contest, Mike Cox, to take a show to Edinburgh where they will perform as JAM Comedy at the Globe Bar throughout August.

He said: “Gigs like that unlock a new level where you’re in the middle of two professional comedians rather than 19 amateurs.

“It takes a long time to get good. A lot of comedians want to be on TV, but I don’t really, I just want to be respected for being good.”

You can see Joe and Mike’s Edinburgh previews at the Dukebox Theatre in Waterloo Street, Hove on 3 July and the Old Market Theatre in Hove on 20 July.

Watch Joe performing at Komedia in 2012 here (caution – the clip contains a lot of swearing!)