Hove man attacked after walking home from meal out

A 65-year-old man was attacked after walking back home from a meal out in Hove shortly after his friend argued with a driver nearby.

Police are appealing for witnesses to the unprovoked assault in Third Avenue, Hove on Thursday, 27 August. 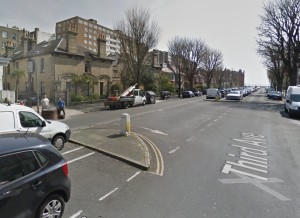 The victim was walking home with a friend after a meal out when the attack took place between 9.30pm and 9.45pm.

He suffered severe swelling and bruising to his left eye, and a cut to his face.

Shortly before the attack the victim’s friend, a 69-year-old man, was involved in an altercation with the driver of a white estate car while crossing Church Road.

An unknown passer-by approached the victim and his friend after the attack to check on their welfare.

PC Matt Smith said: “We do not know who this person is or what they may have seen. We would like this person to come forward so that we can speak to them.

He added: “This was an unprovoked and nasty attack whereby the victim was knocked to the ground. It has caused him a great deal of distress.

“I believe there may have been other people around due to it being a nice evening and the number of restaurants in this location. If you have seen anything, whether it was the car or the attack itself, then please get in touch.”

Anyone who witnessed the incident is asked to email 101@sussex.pnn.police.uk