Woman dies after being hit by train

A woman has died after being hit by a train at Fishersgate Station.

Her death is not being treated as suspicious and it was reported that she was seen on the platform before being hit by the westbound train.

Paramedics from the South East Coast Ambulance Service were called out but the woman died at the scene. 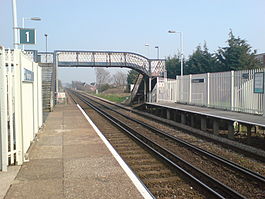 She was named locally as 28-year-old Hayley Wilkes, a local mother of two.

The British Transport Police (BTP) said that officers were called to the railway track in Fishersgate on Friday evening (11 September) after a person had been hit by a train.

The BTP was not treating the death as suspicious but a file would be prepared for the coroner.