A petition signed by more than 5,400 people was handed to a senior Post Office manager this morning (Monday 14 September).

The petition called on the Post Office to keep open its Brunswick Town crown post office, in Western Road, Hove, in response to a proposal to close the branch.

John Taylor, the crown area manager for the south east, met Hove MP Peter Kyle and fellow campaigners to receive the petition on behalf of the Post Office. 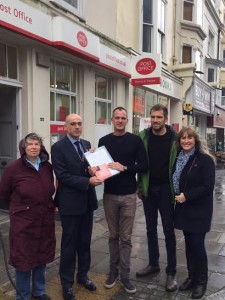 Mr Taylor said that customers and residents had until Wednesday (16 September) to register their views.

The Post Office plans to close the branch in January although it describes the proposed closure as a merger with the Melville Road branch at the Seven Dials.

Mr Kyle said: “If you can’t make a post office work here, it makes you wonder whether you can make one work anywhere.”

The Labour MP said that he was concerned for the old people and those approaching old age who would be expected to walk up the hill to the Dials. There is no direct public transport link.

He said that the Post Office had reported a decline in business at the branch.

And he said that he’d asked the Post Office whether that was because people were choosing not to use the branch or whether it was the result of a lack of investment, adding: “They haven’t been able to give me a clear answer to that.” 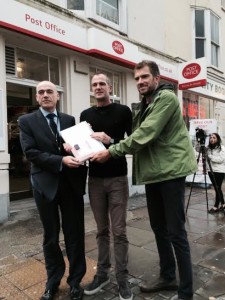 Green councillor Ollie Sykes, who represents Brunswick and Adelaide on Brighton and Hove City Council, said: “I really hope that the Post Office will listen to the local strength of feeling.”

More than 2,000 people had signed an online petition on the 38 Degrees website as well as the 5,400 who had signed the paper petition, he said.

Councillor Sykes added: “If this did disappear the Post Office would not be meeting their social and community mandate.”

A show of support for the branch is taking place all through lunchtime today (Monday) in the form of a queue to buy stamps, starting outside neighbouring City Books at noon.

The organisers said: “When queue is long enough we will start to enter to buy stamps (even one will help) or to conduct any other Post Office business.

“The aim is to make the branch sell out of 2nd class stamps.”

One of the campaigners, Inge Sweetman, who owns City Books with her husband Paul, said: “If people can come to the queue it would be lovely. I know the weather might be inclement.

“And please send in a letter if you haven’t already done so.”

Ready-written copies of a letter of objection to the closure are available in City Books.

Post Office area manager Mr Taylor said that a decision would be taken as soon as possible after the public consultation ends on Wednesday.

If the proposed merger goes ahead, the branch would probably close in January.