A flypast of Spitfires and Hurricanes to mark the 75th anniversary of the Battle of Britain filled the skies over Brighton and Hove this afternoon. 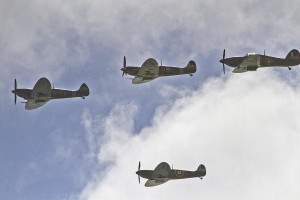 Marc Pinter took this picture of some of the planes taking part from Marine Parade as they flew over Brighton Marina.

About 40 plans took off in waves from Goodwood in West Sussex before dispersing around the south.

Prince Harry was due to take part, but gave up his seat for a battle veteran when one of the Spitfires was grounded.

A service held at St Paul’s Cathedral earlier today was attended by David Cameron, and Jeremy Corbyn before he made his to Brighton to address the TUC.