Sussex Police issued an appeal for help in its search for a suspected Brighton sex offender today (Tuesday 22 September).

The force described Christopher Bunn, 36, also known as Chris, as one of Sussex’s most wanted men.

Bunn is thought to have “dropped off the radar by moving around the country with other nomadic groups of people”, the force said. 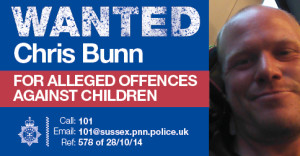 He was arrested in October last year and is wanted for questioning on suspicion of having indecent images of children, having an offensive weapon and sexual activity with a child under 13.

He failed to answer bail in April and was already being sought having breached the conditions of his bail.

Bunn appeared at Brighton Magistrates’ Court on Friday 16 January when he pleaded guilty to shoplifting at TK Maxx, in North Street, Brighton, in November last year.

Bunn, previously of Stanley Street or Stanley Road, Brighton, was described as white, 6ft 1in tall and of thin build, with blond hair and blue eyes.

He is known to frequent Brighton and Bristol and was seen in the Diss area of Norfolk in April.

PC Russell Pritchard said: “Bunn has no fixed address or known transport but often moves around the country having links to travellers, including new age and narrow boat communities.

“He would appear to be living ‘off the grid’ but we are really keen to find him and question him about the offences he is alleged to have committed.

“Although there is no information to suggest that Bunn is currently committing offences involving children we cannot rule out the possibility that he might seek to do so.”

Anyone who has seen him or who knows his whereabouts is asked to phoned Sussex Police on 101 or email 101@sussex.pnn.police.uk.