A 16-year-old boy has been arrested over the armed robbery at a corner shop in Hangleton last week.

He turned himself in and is currently in custody, Sussex Police said. 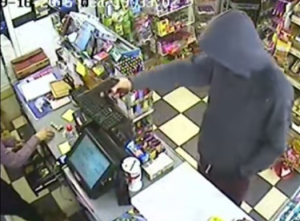 The force said: “A 16-year-old boy has handed himself in in connection with the robbery at Elm Stores, Hangleton, Hove, at 8.30pm on Wednesday 16 September.

“The boy has been arrested on suspicion of robbery and possession of a firearm. The gun has also been recovered and is a BB gun.

“He is still in custody.”

Yesterday (Thursday 24 September) Sussex Police released CCTV footage showing the armed robber walk into the shop and point a gun at the 20-year-old girl behind the counter.

The force said: “About £500 was stolen by a masked man who threatened a member of staff with what appeared to be a handgun.

“The attack happened … while the woman assistant, 20, was alone.

“After she handed over cash, the robber left on foot in an unknown direction. The woman was shaken but unhurt.

“He left on foot down a footpath leading to Hove Cemetery and Knoll Park.

“A search was made and a tracker dog helped officers recover items of clothing discarded by the fleeing thief.”

Detective Sergeant Chris Lane, of Brighton CID, said: “This was an unnerving but fortunately rare incident and no one was hurt.”