Brighton and Hove Labour party recognised for May election wins

The city’s Labour councillors have been recognised by their party at this year’s conference for their successful campaign to take control of Brighton and Hove City Council in May. 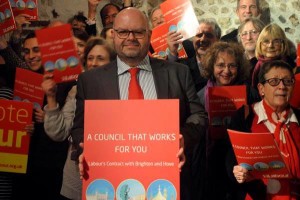 Leader of the council Warren Morgan and his fellow councillors Emma Daniel and Maggie Barradell were given the Best Practice in Campaigning award by general secretary Ian McNichol and deputy leader Tom Watson MP at the opening session of the conference yesterday.

They were one of four groups chosen by Labour’s national executive committee to reflect innovation and success in campaigning, and various events this week have been set up to share that campaigning best practice.

Coun Morgan said: “I am proud to accept this award on behalf of councillors, candidates, party organisers, members and volunteers who campaigned so hard for Labour in the local elections.

“We almost doubled the number of Labour councillors, and gave the residents of Brighton and Hove the chance to make a positive vote for a council that would work for them, as an alternative to the divided and directionless Greens.

“I am pleased that the Labour Party has recognised our achievement and the good work we are already doing to deliver our pledges on jobs, homes, poverty and basic council services.”

The award comes a week after the city’s Liberal Democratsn were given an award by their national party for recruiting new members.

The Penhaligon award was presented by Liberal Democrat President Sal Brinton at the national party conference in Bournemouth on 23 September, recognising the doubling of membership locally, the biggest rise in the country.

The trophy was presented to Chair of the local party Paul Chandler and active local campaigner Jeremy Gale. Mr Chandler said: This is an honour and a surprise. Jeremy and I are delighted to represent all the officers and members of Brighton and Hove Lib Dems who have worked so hard to fight back after the shocking defeat in May.”