Brighton and Hove City Council is starting building five new homes for rent on local authority land formerly used for parking that has been cleared in Ardingly Street, Kemp Town. 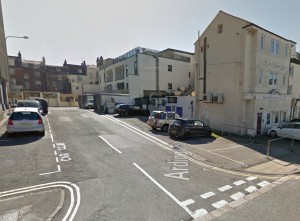 The scheme is one of seven underway this year which will provide 77 new council homes for rent this year – but many more will have to be built for the council to achieve its target of at least 500 new homes to help house the 22,000 people on the city’s housing waiting list.

Councillor Anne Meadows, chair of housing and new homes, yesterday inspected the piling work for the foundations of the new block, which is expected to be completed next summer.

Coun Meadows, chair of the housing and new homes committee, said: “This is the sixth new housing scheme underway in the city and will provide five new affordable rented homes for people in the city.

“It’s extremely hard to find an affordable rented home in Brighton and Hove and we have over 22,000 people on our housing register waiting for a home.

“Five may not be many but the more in-fill that we use and get as many homes on formerly used land the better for everyone.”

Another site in Preston Road was completed in July, and more sites are planned, including a major development of 57 flats on the former Whitehawk Library site in Findon Way.

The Ardingly Street development obtained planning consent in April this year and started on site in late August. It will comprise three one bedroom flats, a two bedroom maisonette and a two bedroom flat on the ground floor specially designed for wheelchair users.

The building will achieve high energy efficiency and sustainability standards, with solar panels to be installed on the roof.

As well as the wheelchair accessible flat, the other flats will be built to Lifetime Homes Standard, with easy access and easily adaptable for tenants with mobility needs.

All flats will be let through the Homemove choice based lettings system at affordable rents to residents in housing need.