Brighton and Hove is home to almost 3,000 trans people, but although the city is largely trans-friendly they still face discrimination, abuse and isolation. 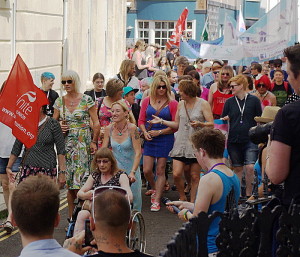 Three years ago the city council’s trans equality scrutiny panel set out to ask what needs to be done to make things fairer for trans people in the city. This needs assessment is one of the responses to that challenge.

Trans community members were at the heart of this work, alongside partners from statutory services and the community and voluntary sector.

The needs assessment found that

Emma Daniel, the city  council’s equalities champion, said: “This needs assessment is a vital piece of work because we want to understand the needs of our important trans community. The more we understand, the better we can respond.

“Although the trans-friendly nature of our city has been recognised there is still some way to go before all members of the trans community are able to go about their lives in the city in a way in which most of us take for granted.

“Many people in the city don’t appreciate the kinds of difficulties which trans people can face and I hope this work will also help to raise awareness.

“The city has already made some progress, including some improvements to sports facilities and providing a toolkit for use in schools.

“I look forward to building on this work together with the trans community and our partner organisations.”

Dr Samuel Hall, chair of the Clare Project said: “This report takes a major leap forward. It highlights the level of discrimination and prejudice that is ongoing in our city, but also the strengths of the local trans community and, importantly, provides practical recommendations on how inequality can be tackled and local and national services can be improved.”