The taxi app Uber has been given a date when it should learn whether it will be allowed to operate cabs in Brighton and Hove.

A licensing panel – made up of three councillors – is expected to hear an application from Uber at Brighton Town Hall on Monday 19 October.

Brighton and Hove City Council licenses taxis but many cabbies are concerned about the threat to their business from Uber and similar apps such as Gett, Cabify, Hailo and mytaxi.

They expect the value of their hackney carriage plates – and by extension their taxis – to drop if Uber is granted permission to ply for trade in the area.

Some existing operators such as City Cabs have apps of their own but they lack the brand recognition enjoyed by a number of the newcomers. 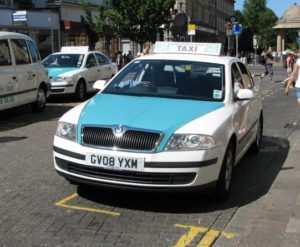 At a council Licensing Committee meeting in June councillors flagged up concerns.

These were reflected in a statement from the council which said: “The city council requires CCTV in all taxis and private hire vehicles as part of measures to protect passengers and drivers, enhanced police checks for drivers, high training standards for drivers and the provision of wheelchair-accessible vehicles.”

The Uber application could prove unnecessary because of changes to the licensing laws which take effect from today (Thursday 1 October).

They allow private hire drivers to operate anywhere in the country provided they are licensed by at least one council.

When the council’s Licensing Committee met in June, even those most in favour of competition and free trade expressed concern.

Local cabs adhere to higher safety standards than in some parts of the country and private hire drivers voluntary subscribe to the same standards as taxi drivers in Brighton and Hove.

The council said: “The city council requires CCTV in all taxis and private hire vehicles as part of measures to protect passengers and drivers, enhanced police checks for drivers, high training standards for drivers and the provision of wheelchair-accessible vehicles.”

Yesterday about 1,500 black cab drivers brought parts of central London to a standstill to protest about the handling of Transport for London’s (TfL’s) handling of Uber.

TfL is consulting on whether to tighten up some of its rules, a move criticised by Uber which is positioning itself as a consumer champion.