Gaye Greely, receptionist at the White Horse in Rottingdean, has been recognised for her 30 years of service. 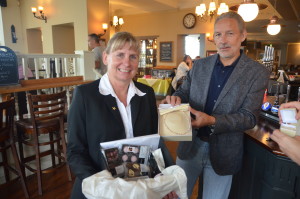 Gaye started working at the White Horse in 1985. Since then the hotel, which is part of Old English Inns, has undergone many changes, including an extensive refurbishment earlier this year.

In recognition of reaching her pearl anniversary, manager of the White Horse, Audrey Kelly, organised for Gaye to receive a Jersey pearl necklace and matching earrings, as well as a large box of confectionary.

Former manager of the hotel, John Ellis, who worked with Gaye for more than 20 years, returned to present Gaye with the gifts.

Gaye said: “It honestly does not feel like three decades has gone by! I have seen lots of change in that time as technology improves and people come and go, but at its heart my role is still to be that friendly face that welcomes guests when they come here.

“It was lovely to see John again and I was really touched to receive the gifts.”

Outside of her day job at the White Horse, Gaye is an award-winning synchronised swimmer, travelling all over the world to compete and most recently receiving a gold and silver medal in the 16th Fina World Masters Championships in Kazan, Russia.

Audrey said: “Gaye does a fantastic job here and we knew we had to do something to mark this special anniversary. Reaching 30 years’ service is not as common as it used to be, particularly in hospitality, and Gaye should be very proud of her hard work and dedication over the last three decades.”

The White Horse was built in the 1930s and is the only seafront hotel for a 50 mile stretch. It is part of Old English Inns, a group of unique pubs, inns and hotels across England, each with its own character and heritage.