Brighton flat shut down after wild parties and violence

A flat has been shut down because of 24-hour parties, violent physical assaults and illegal motorcycling in Powis Square, Brighton.

The flat, in the quiet, residential area in central Brighton, has been ordered to shut for three months. 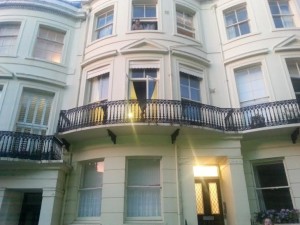 Numerous visitors used her house for holding parties and one regular visitor advertised parties on Facebook.

Drug use was reported as well as suspected dealing. And there were cases of people climbing neighbouring balconies to reach the property, numerous incidents of fighting and “domestics” from within the property and in communal areas.

Brighton magistrates imposed a closure order after hearing evidence of the worst and most violent cases of anti-social behaviour that the council has ever experienced.

The order, made under section 80 of the Anti-Social Behaviour Crime and Policing Act 2014, is the first of its kind requested by the council.

Brighton and Hove Community Safety Team received complaints from local residents of parties running throughout the night, speeding motorbikes and revving engines as well as loud verbal abuse and worked to support and re-assure those residents whilst gathering evidence. The Community Safety Team also liaised with the tenant and landlord of the property to ensure that they were aware of the reported concerns and what action would be taken if the behaviour didn’t cease.

The council’s community safety manager Peter Wileman said: “The occupant of this premises and her visitors have clearly caused considerable nuisance and distress towards the neighbours of this quiet, residential square.

“The Community Safety Team has responded quickly and robustly to address the concerns of local residents and has taken swift and decisive action.”

The council quoted one resident as saying: “I cannot praise the council’s Community Safety Team‎ enough.

“For several months the tenant and her associates brought misery to residents in Powis Square due to their constant anti-social behaviour.

“In exasperation I reported this to the Community Safety Team and within two days they had arranged a meeting to ‎discuss the issues and way forward.

“They encouraged us to report the anti-social behaviour and within a month of the initial report had ‎secured a closure order on the property.

“The Community Safety Team kept us informed continuously and clearly worked longer hours than was required to resolve this issue to the relief of many residents.”

Councillor Emma Daniel, who chairs of the Neighbourhood, Communities and Equalities Committee, said: “No one in our city should suffer from anti-social behaviour.

“The Community Safety Partnership will continue to use the powers under the new Anti-Social Behaviour, Crime and Policing Act to ensure that communities are kept safe from such problem premises should they emerge anywhere in our city.

“If anyone experiences antisocial behaviour we would advise them to make contact with our Community Safety Team or the police.”

Anyone experiencing antisocial behaviour or hate incidents can contact the Community Safety Casework Team on 01273 292735.