The storms of August 13 caused such a huge flood in Brighton’s storm drain the water smashed the concrete floor of the entrance to the sewers into pieces. 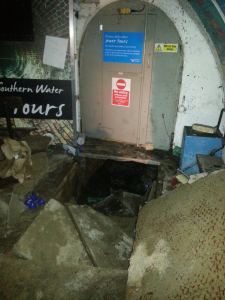 These pictures, released by Southern Water today, show the extent of the damage to the room, which is used to host tours of the sewers beneath the city streets.

The tide marks go right up to the 8ft ceiling, and although the floor has now been repaired, water damage to the painted walls can still be seen.

Tour guide Stuart Slark said the damage to the sewers was even worse than that caused by the Great Storm of 1985.

An investigation into what caused the flooding is ongoing, although an unconfirmed rumour amongst seafront traders speculates a closed sluice gate may have been to blame.

A spokeswoman for Southern Water said: “The floor was broken following a flooding event at the sewers in August. At the time the Met issued an extreme weather warning after a month’s rainfall fell in just over 24 hours.

“The investigation is ongoing but, repairs have now been carried out and the floor re-enforced with steel bars and re-laid with concrete.

“We were sorry that some people had sewer tours cancelled while we cleaned up following the damage and look forward to welcoming more people to our award-winning tour next year.”

Meanwhile, traders affected by the floods are waiting to hear from Southern Water after submitting claims for compensation.

Mike Hedger, who saw a 10ft spout of water blowing a crater in the pebbles from what he believes was a storm drain vent under the beach, said he had put in a claim last week.

He said: “I have spoken to people in their customers services department and I have just put in a compensation claim now so I am waiting to hear back from that.”

The storm damage along the seafront also affected Riddle and Finns, the Gym Group and Concorde II, leading to the early closure this year of the Madeira Lift.