A thief who broke into a Brighton charity shop to steal a safe containing more than £350 was clearly not entirely without conscience. 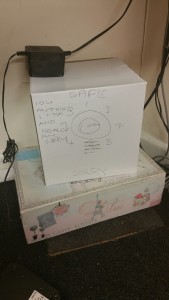 For in place of the cast iron strongbox, he or she left a drawing of a safe bearing the words: “I O U ANYTHING I TOOK AND REALLY AM SORRY”

The target was the British Heart Foundation’s shop in London Road, Brighton.

The burglar struck at some time between 6.15pm on Friday and 7.45am the next day, when the shop manager discovered the safe gone.

It is thought the intruder may have climbed up scaffolding on an adjacent bulding before using a flat roof to reach and smash a sash window to gain entry.

The burglar may then have escaped using the same route.

PC Lucy Goering, of the Brighton Neighbourhood Response Team, said: “This was an unusual burglary in that the offender left an apolgetic note, but this was nevertheless a significant loss for the charity concerned and we still need to trace the person responsible.”

Anyone who saw anything suspicious or who may have other information is asked to email 101@sussex.pnn.police.uk or phone 101, quoting serial 325 of 24/10.