Over £2000 was raised by supporters of the St John Ambulance Brighton Homeless Service during a Cardboard City Sleep Out on Friday 23 October. 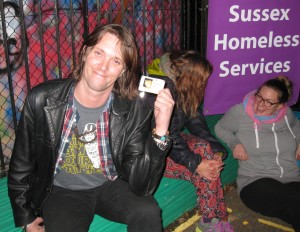 14 people took on the challenge to see whether they could “survive until sunrise” by sleeping overnight in Brighton to support the charity’s outreach service.

Joining them for the overnight stay in the grounds of Patcham House School was special guest James Bowen, author of A Street Cat Named Bob. He gave a talk on his experiences as a homeless busker on the streets of London and how his adopted cat Bob helped him turn his life around.

As well as hearing James’ story, the participants then had to build their own cardboard shelter for the night and sleep out under the stars.

“Patcham House School has been very kind, offering their grounds for us to sleep out in. Three members of staff also took part in the event, and the school has been fundraising to support the service, which is amazing.

“The event overall went extremely well and everyone was delighted to spend the evening hearing the tales of James and Bob the cat. It really does bring home to you what struggles homeless people face and how important it is to provide support to some of the most vulnerable people in our society. Thanks to all who took part and for making it a great success.”

Local businesses got behind the event too: Tastables donated fruit and vegetables, and the vegetables were made into soup by AJ’s Catering, which delivered the hot soup and rolls on Friday evening to those taking part.

At 6am on Saturday morning, as people began to wake, staff from Asda at Hollingbury came along and cooked them bacon rolls and veggie sausages, as well as providing orange juice and croissants.

The Brighton Homeless Service provides nurse-led health care, podiatry and first aid to homeless and vulnerably housed people through its outreach drop-in clinics. They are held at the Peace Statue, First Base Day Centre, and Project Antifreeze.

For more information about the work of St John Ambulance go to www.sja.org.uk.