Beard enthusiasts are urging the handful of Brighton and Hove men who don’t yet have a hairy chin to grow one this December for charity. 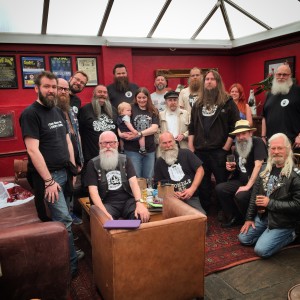 A meeting of the BBC in Brighton this year

Inspired by Movember, which asks men to grow moustaches to raise awareness of men’s health, the British Beard Club (BBC) is launching “Decembeard” in Brighton this Sunday.

Their good cause is Beating Bowel Cancer, and the launch event will feature information and advice on grooming.

BBC president David Dade said: “We also want to pass on the good word about the wonderful friendship and bearded camaraderie that we’ve all experienced since joining The Beard Clubs of Britain.

“We’re encouraging and inviting non-bearded people who have never grown a beard before to use the month of Decembeard as a happy excuse to grow the beard they’ve always wanted.”

The bearded enthusiasts want to encourage as many people as possible to sign up and get their family and friends to sponsor them throughout December.

Bare-faced gents are invited to the launch of Decembeard at the Lord Nelson in Trafagar Street, at noon on Sunday.