Brighton’s gay village in moves to become a parish council

The area often dubbed Brighton’s gay village is to be asked whether it should get its own parish council in a bid to help it tackle issues such as drugs, rough sleepers, noise and beggars. 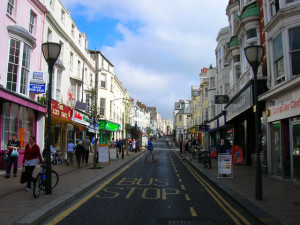 The St James’s Community Action Group believes that the money which comes with parish designation would help them tackle antisocial behaviour which the city council and police have no budget for.

Money comes from a combination of local authority grants and a precept of up to £20 added to residents’ council tax bills.

And if the group, which currently operates as a local action team (LAT), manages to persuade enough residents to back its plans, it could be holding elections as soon as next May.

The plans are detailed in a post on the group’s website. It says: “The LAT has achieved much but the same problems keep coming back to meetings.

“Anti social behaviour, drugs, rough sleepers, noise and beggars – which are reported to the city council and police who say they have no budget. A parish council would not be able to solve all problems but would have a budget to put right things that contribute.”

It suggests the money could be spent on repairing the gate to Dorset Gardens Park and New Steine Garden and install lighting to keep drug dealers out, and maintain trees, planting and hanging baskets.

It also says that parish council status would mean it would need to be consulted about licensing applications, and Pride would have to negotiate with it when organising the annual Village Party.

The LAT is now drafting a petition, which it will need 7.5% of residents living within the proposed parish boundaries to sign – 276 out of 3,668.

If enough people sign, then a city-wide consultation follows, with the final decision down to a full meeting of the city council.