A man was arrested for arson with intent to endanger life after a blaze at a Brighton flat this afternoon. 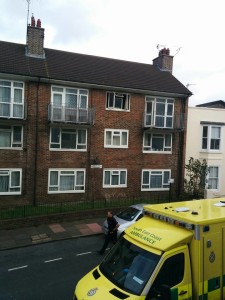 An ambulance outside the Park Crescent flats this afternoon. Picture by Steve Allen

East Sussex Fire and Rescue have also launched an investigation into exactly what caused the fire at a flat in Park Crescent, Brighton.

Fire crews were first called to the flat at 12.24pm today, with police assistance called in about 20 minutes later.

Three fire engines from Preston Circus and Hove were sent to Park Crescent. Firefighters used breathing apparatus to gain access to the second floor flat where the fire had started.

A spokeswoman for ESFRS said: “All persons have been accounted for and one man has been conveyed to hospital suffering smoke inhalation. Crews used a positive pressure fan to ventilate the area.

“A fire investigation is currently taking place to establish the cause of the incident.”

A police spokeswoman said: “A 48-year old man was arrested at the scene on suspicion of arson with intent to endanger life. After being treated at the Royal Sussex County Hospital for a cut hand he was taken to custody for interview and further enquiries.

“Nobody else was injured and there was no other fire damage.”

A spokesman for South East Coast Ambulance Service said: “We attended the scene with two ambulances and one ambulance car. Crews attended to a patient on scene who ended up being taken to the Royal Sussex County Hospital.”