A convoy of Mod scooters accompanied the One Show Rickshaw Challenge as it arrived in Brighton tonight. 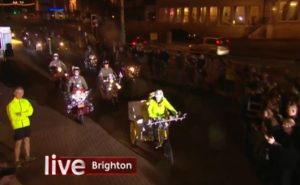 The rickshaw, pedalled by Amira, one of the six young riders chosen to take part, arrived on the Palace Pier just before 7.30pm this evening, halfway through the BBC One show.

Amira was greeted by presenter Matt Baker, who had accompanied her on the ride, plus her fellow riders, her family and Pudsey the Children in Need bear.

Matt Baker said: “I’ve had a lovely welcome from Brighton Pier – here they are, all waiting expectantly for the arrival of the rickshaw.

“As this the centre of the Mod scene, we’re bringing her in in a fitting fashion surrounded by Mod scooters.”

The show heard how Amira, a young carer, has had to grow up incredibly quickly over the last year as her sister had a brain aneurysm. 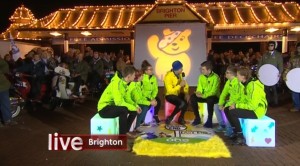 Her mum told Matt the ride had been a great experience for her, saying: “I really hoping that her confidence carries on growing. She’s doing so well, we’re so proud of her.”

Amira and the other riders left Winchester this morning just after 5am, with 63 miles to go.

The show heard how the riders stopped just before 11am to pay their respects on Armistice Day, and spotted a Spitfire over the ride

the show tracked down the pilot Matt Jones, who said: “I was planned to display at 11.05am for Goodwood and I saw that you were going to be somewhere between Petwood and Midhurst.

The One Show Rickshaw Challenge set off from Lands End last Friday, and is due to make it to the East End of London this Friday.

Since it started in 2011, it’s raised £7.9million, and it’s hoped they will raise £2.2million this year to bring the total to more than £10million.

Tonight, the Mods helped reveal they’re more than halfway there, with a running total of £1,266,106. 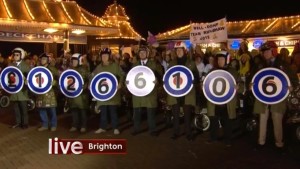