Viaduct Road plantpots could be replaced by communal bins

Controversial plantpot chicanes placed in Viaduct Road have been declared a success and will now pave the way for a permanent traffic calming scheme –  which could replace them with communal bins. 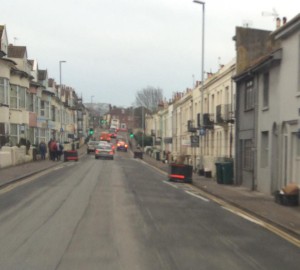 The big black plant pots, rescued after they were taken away from the front of the Duke of York’s to create a mini-square, were placed in the road in February, to the consternation of many motorists.

But in just the first week, speeds in the 20mph road dropped from an average of above 40mph to 23.5mph – and now the planters have had a chance to be monitored over several months, a permanent scheme is on the way.

And at the request of residents, it could make space for communal bins by providing build-outs in the road – which would also help solve the problem of wheelie bins being left on the narrow pavements.

Chair of the London Road local action team Philip Wells said: “One of the big complaints of residents was of the wheelie bins being left on the pavement and rubbish being left on frontages. So communal bin provision could hopefully help remedy that situation.”

A council spokesperson said: “The temporary planter chicane scheme in Viaduct Road has been successful and traffic speeds have significantly reduced.

“We are now in the process of designing a permanent scheme which could also incorporate communal bins which have been requested by residents.”

The trial followed requests from the London Road LAT, which approached the council about ways to spruce up the whole road.