An independent waste company has been given a Government-sponsored grant to come up with plans for a better waste service in the North Laine. 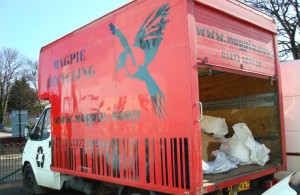 Magpie, which has been running a recycling service in Brighton for 25 years, has been given £8,000 by community group network Locality to come up with proposals for a joint commercial and residential waste collection.

“We don’t want to impose something we want to say look at what we are thinking about.

There’s a lot of reluctance because it sounds like we just want a waste contract. But it’s not about a bigger Magpie, it’s about a better Brighton. Our focus is on the right thing at the right time.

“Given the mess of the recycling we have got at the moment, if we can provide something that can work alongside it – why not?

“The plan goes to Locality, who then give feedback then by April, plan is presented to any interested parties who want to progress the idea.”

“In principle we both liked the idea however we both thought in practice it would be hard to get this off the ground as especially traders changing to a new supplier would be difficult to achieve unless much cheaper contract.”

A spokeswoman for Locality said: “Locality has awarded a grant of £8,000 as part of the Our Place programme. Locality runs Our Place on behalf of the UK Government to support communities to work together to transform their local services.

“The grant is to develop a partnership (which includes Magpie) in the North Laine neighbourhood of Brighton for an innovative project to increase recycling, reduce air pollution and develop relationships between local businesses and residents on a street by street basis in the centre of Brighton.”