A determined vandal who seems intent on dumping all the litter bins in Queen’s Park into its duck pond has struck again this week. 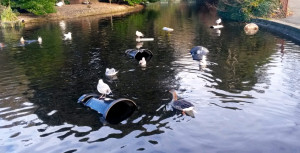 The bins in the pond this morning

All the park’s bins were uprooted and thrown into the pond last night – at least the third time it’s happened since the summer.

The strange and persistent sabotage has left the Friends of Queen’s Park scratching their heads – but determined to stop it.

Conrad Bunner, the friends’ information officer, said: “The bin dumping began in the summer. This week is at least the third time all the bins have gone in the water, and the last time was three weeks ago.

“It’s mystifying. We hope that raising awareness will help.” 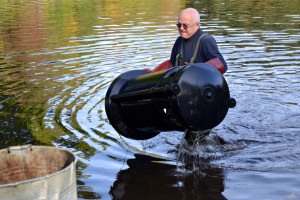 A spokesman for Brighton and Hove City Council said: “Cityparks has been made aware that several bins have been thrown into the pond at Queens Park. Several bins were retrieved from the same location last weekend.

“The bins will be removed again as soon as possible. Any long term plans for the bins and their security will be dealt with in due course.”