Islamaphobic taunts made on Brighton campus while Muslim students pray

A group of young men popped balloons and shouted “Isis are coming” outside Falmer campus’s Muslim Student Centre on Friday while students prayed inside. 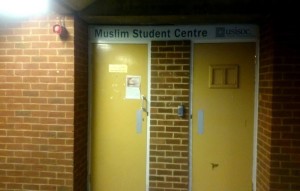 The incident happened at about midday after the six men left the nearby Amex stadium, where they had been taking part in an Albion in the Community (AITC) course, from which they have now been suspended.

University paper The Badger reports “The group stood outside the Muslim Student Centre, located in Falmer House, shouting “run, ISIS are coming”. They then popped colourful party balloons, presumably to simulate the sound of gunfire.”

The University of Sussex’s Islamic Society has now invited the group back to meet the students with the aim of building a united community rather than a divisive one.

And meanwhile, the society has issued advice to any of its members experiencing Islamaphobic abuse to not respond in anger, but to report it to the authorities.

Ridwan Barbhuiyan, society president, said he was notified of the incident by the Student Union (SU), who told him campus security had arrived swiftly, but the men had gone.

He said: “I am very grateful to both the SU and campus security for their swift and professional responses, as well as general support on the matter and issue of dealing with anti-Muslim/Islamaphobic incidents, and it’s comforting for the Muslims on campus to know that we aren’t alone in this.

“Regarding the group responsible for the incident themselves, I haven’t heard of any further developments. However, if they (the group) are identified and willing to, I think/hope it would be good for all if they were to meet with some of the Muslim students at our university, just so we can actually get to know each other to prevent anybody from passing premature/unqualified judgement on each other.

“Hopefully, rather than a divisive community, we can instead build one united on mutual respect and understanding, at the very least.”

“Albion in the Community and the club condemns any form of xenophobic behaviour, and will not tolerate behaviour of this nature from any individuals connected with the club.”

A police spokeswoman said officers were called at 1.10pm to a report that a group of men had walked past the on site mosque on the Sussex University campus and burst a balloon and shouted bomb.

Officers and university security attended and through speaking to witnesses and viewing CCTV they identified the group of youths responsible who were on a training course at the Amex Stadium.

Inspector Paul Ransome said: “The group were spoken to and admitted their involvement. There was no evidence to suggest that this was anything other than a joke and they had not realised the implications of their actions.

“The youths were issued with strong words of advice and further preventative action is being taken by their course management team.”