Brighton and Hove Albion sit proudly at the top of the Football League after goals from Solly March and the legend that is Bobby Zamora saw off sixth place Birmingham.

The Seagulls really had to dig deep to secure a victory. Birmingham had the ex-Albion custodian Tomas Kuszczak in goal.

Albion’s first real chance fell to Tomer Hemed who saw his shot blocked by Kuszczak after good work from Gordon Greer and a great knock down by Zamora.

Hemed then had another chance that was smothered well by Kuszczak.

But it was good work from Jamie Murphy that created Albion’s first goal.

The Scottish winger skipped clear of challenges to fire in a cross towards March. The England U21 winger’s first shot hit Hemed on the backside – but rebounded back to March who blasted it past Kuszczak to put Albion 1-0 in front.

The Seagulls weren’t ahead for long though. The impressive Demarai Gray had already worried the Albion defence and again broke clear on the right and forced Stockdale to push his shot back into play and into the path of Jon Toral who calmly restored parity into an unguarded net.

March was terrorising the Blues defence and getting into some great crossing positions.

As Albion took the game to Birmingham, so the full backs pushed up and when Liam Rosenior raced into the area, he was taken out by Jonathan Spector. It looked like Rosenior dislocated his knee and he was stretchered off to be replaced by Inigo Calderon.

Albion had the ball in the net again soon after. Hemed bundled the ball over the line after Kuszczak palmed it towards his own goal. Lewis Dunk was adjudged to have committed a foul but it was difficult to see where and how.

Albion’s best chance to go back in front came from a Beram Kayal free kick on the D after March was fouled by Jonathan Grounds. Kuszczak pushed his effort around the post.

Before half time Nicolai Brock-Madsen saw a shot glide just over the bar and  Toral found himself in space but fired inches past the post.

The first half ended with six minutes of injury time.

It was Zamora who put Albion back in front two minutes into the second half. Murphy’s cross for March was deflected into Zamora’s path and, rolling back the years, Zamora was in the right place at the right time to slam the ball home on his first start in over 12 years to put Albion back in front. It was an astonishing feat that delighted the crowd.

Birmingham, however, weren’t prepared to let Albion steal a win that easily and continued to push the Seagulls back in to their own half.

Albion were at times reduced to counter-attacking, but with aplomb, Kayal feeding sublime through balls to March and Hemed.

James Wilson almost crowned his debut with a goal after replacing Zamora. He ran on to a Kayal through ball. The young Manchester United forward’s shot hit the post and rebounded back to a stranded – and grateful – Kusczak.

Birmingham tried their best but a combination of March, Wilson and Bruno Saltor kept them occupied.

Before the six minutes of injury time was announced, Stockdale made a brilliant save low to his left from David Davies.

During the six minutes of injury time March fired across the penalty area but Wilson couldn’t quite get there.

And March and Stockdale were booked  for timewasting by picky referee Gavin Ward.

Albion remain unbeaten, are top of the Football League and returning hero Zamora is scoring. 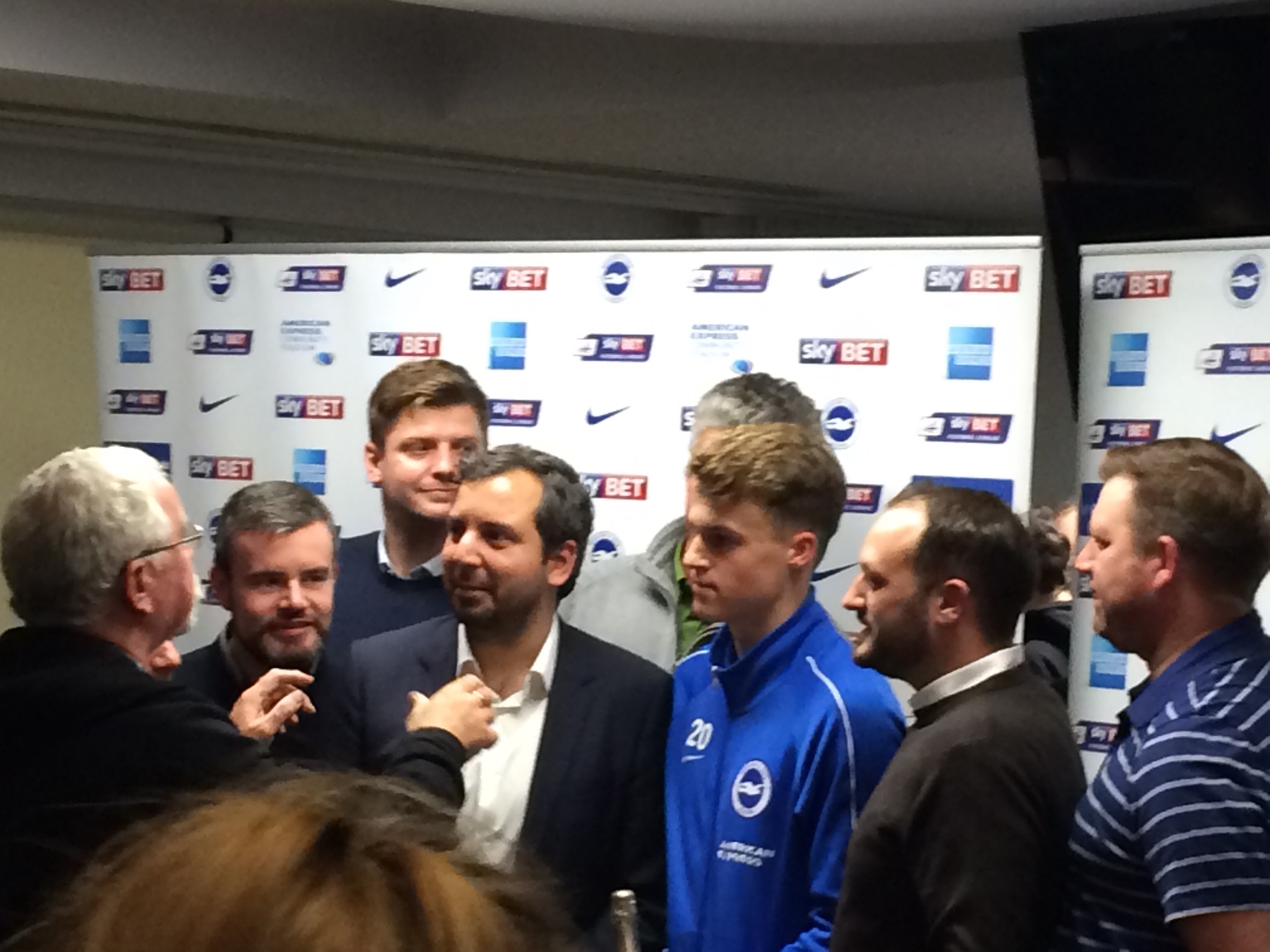 Solly March collects his man of the match award in the Bupa Lounge.