Several rush-hour trains have been cancelled and others delayed as commuters struggle to make it home to Brighton and Hove this evening (Monday 8 February).

The disruption has been blamed on Storm Imogen, with a tree being blown down on the main line. Level crossing problems at Ford also led to delays on Southern services.

“Speed restrictions are now withdrawn and trains are now able to run at their normal speed.

“At present services are being delayed by up to 20 minutes across the network due to earlier speed restrictions.”

The online live departure boards told a different story, with a number of cancellations throughout the late afternoon and early evening.

And on Twitter the train company said that there were still delays as a result of the line being blocked between Haywards Heath and Three Bridges earlier this afternoon by the fallen tree. 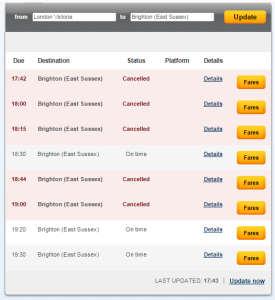 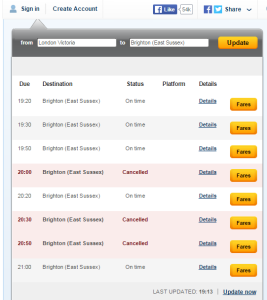 ⚠There are residual delays following an earlier line obstruction between #ThreeBridges and #HaywardsHeath.

#StormImogenSouth– London Bridge-Brighton services have been suspended this afternoon. Ticket acceptance is in place with @SouthernRailUK