Police are appealing for witnesses after a 14-year-old boy was stabbed in College Place, Brighton at around 8.20pm last night. 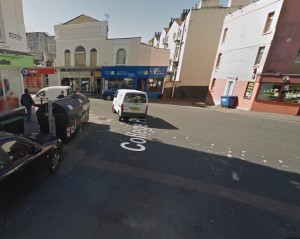 The victim, who is from Brighton, was walking with a friend in Bloomsbury Place when they were approached by a man.

They walked towards College Place, where the suspect, who is described as wearing dark clothing, is believed to have stabbed the victim before heading south towards the seafront.

The two boys made their way to the Ginger Dog pub to ask for help. The victim was taken to hospital with a minor wound to his stomach that required stitches and has since been discharged.

Marianna Katsouris, licencee and general manager of the Ginger Dog, was at the pub when the boys knocked on the window for help.

She said: “One of the boy’s friends was saying ‘I need help, I need help’. The boy who had been stabbed fell over and almost passed out – he looked quite pale.

“That’s when I called the ambulance and said you might want to call the police as well as he seems to have been stabbed.

“They said they didn’t know who it was, and that it happened so quickly.

“It caused quite a commotion in the street. I was worried about him last night, as we didn’t know how he was, but I’m glad to hear he’s been discharged.

“You assume Brighton to be quite a safe place but you worry these days – there was a mugging in the same street the week before.

“We are having to remember to lock the back door in the evenings – it makes everyone a bit more cautious.”

Inspector David Robinson said: “We are keen to speak with anyone who saw the two boys walking together on Tuesday evening just before the attack.