Britain’s biggest school dance show is back as more than 2,000 children from Brighton and Hove take to the stage at the Dome for Let’s Dance.

Dorothy Stringer School, which organises the week-long festival of dance, said: “It plays a major role not only in encouraging our young people to be active but also in ensuring that dance and physical activity remains a high priority in educational establishments across the city.

“We have a total of 74 schools, colleges, community groups and university groups taking part with an age range from reception right through to adults. 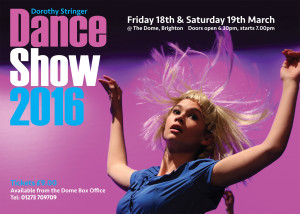 “It is a hugely popular event both with the performers and audience. The children in particular all really enjoy it.

“For some it is a once in a lifetime opportunity to perform on a real stage, in a grand venue, in front of a packed audience.

“They put so much hard work into their costumes and routines and are very excited but still manage to be incredibly professional.”

Let’s Dance opened on Monday (14 March) and with a final performance at 7pm this evening (Thursday 17 March). Doors open at 6.30pm.

There is an encore tomorrow (Friday 18 March) and on Saturday (19 March) with two nights of the Dorothy Stringer Dance Show, also starting at 7pm.