Tenants have started moving into newly completed council flats which have been built on the site of the old Whitehawk housing office.

The nine one-bedroom flats are part of a scheme to build at least 500 homes on land owned by Brighton and Hove City Council by 2020.

The scheme is known as New Homes for Neighbourhoods and is intended to provide much-needed affordable housing.

She also welcomed some of the first tenants to move in, including Tekin Akkurt and Sylviane Cayrol with her dog Tilly. 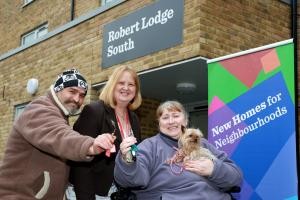 The council said: “Residents already living in 70 existing council flats at Robert Lodge were involved in consultation on the development and their feedback helped to shape features of the final design.

“This includes a new look for the communal gardens, with new trees and seats which will be enjoyed by new and existing residents of Robert Lodge.

“The building project also created opportunities for apprentice plumbers and electricians with contractors working on the site through the council’s Local Employment Scheme.”

Councillor Meadows said: “This is the latest scheme to be completed under the council’s New Homes for Neighbourhoods programme which is building much-needed new homes for rent on council land and we are delighted to welcome the new residents.

“The programme is also about working with local residents to improve their neighbourhood and we are grateful for the support and input we have received from people already living at Robert Lodge before and during construction.”

The flats replace an old prefab office building which housed the Manor Place housing office which has moved to the Whitehawk Community Hub.

Now Robert Lodge South is complete, work is starting on six more flats at the other end of the site.

Robert Lodge North will be a mix of one and two-bedroom flats and is due to completed by the end of the year.

The council said that a planning application was being prepared for 12 new homes in the North Laine. And four small council-owned sites were included in a Royal Institute of British Architecture Design Competition, with winners to be announced this April.

Housing chiefs are also looking at other former or underused garage and infill sites on council land.

The council added: “People currently on the council’s housing register, including council tenants who need to move to a home that meets their current needs, can apply for homes built under the New Homes for Neighbourhoods programme through the council’s Homemove choice-based lettings system.