A Government report into the feasibilty of creating a second Brighton mainline by reopening the Lewes to Uckfield branch has been delayed until autumn – but campaigners say this gives them cause for optimism rather than concern.

The London and South Coast Study was initially due to be completed by Christmas last year, and then early this year, but it has now been postponed until autumn.

But Brian Hart, whose BML2 campaign kickstarted the process, says this shows the Government is taking the possibility seriously.

He said: “This is no bad thing. If the Government wanted a negative answer then it could have wrapped this up in a couple of weeks last year, saying there was “no case”. The fact that they are doing a great deal more work is positive and shows they are taking it seriously.

“The consultants have come back to us on a number of occasions, asking many searching questions about how BML2 works and clarifying certain aspects.”

The study, carried out by consultants WSP|Parsons Brinckerhoff, was originally intended to only explore the possibility of reopening the line between Lewes and Uckfield, but was widened to include extending services down to Brighton when George Osborne announced extra funding in August.

Mr Hart added: “Successive governments have kicked this particular can down the road for over 45 years and the current situation on the railways in Sussex and Kent is now dire. That’s why there is so much support, confidence and optimism about BML2.” 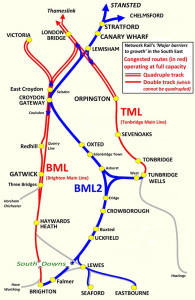 BML2’s proposals for a new mainline would see trains travelling from London Bridge or Stratford south through East Croydon, Oxted, Uckfield and Falmer before arriving in Brighton.

The route would involve creating at tunnel at Ashcombe between Uckfield and Falmer.