A jobless man from Hove is being held on remand in prison to await a trial by jury after being accused of stealing from pensioners.

Thompson was accused of going into the residents’ lounge in a council sheltered housing block – Sanders House – without permission and stealing electronic goods worth £600.

He was alleged to have stolen a Phillips television, a Blu-Ray player and a Wii console from the block, in Ingram Crescent West, in Hove, in November last year. 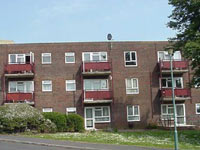 The theft was publicised by Councillor Robert Nemeth who released CCTV images of the suspect. He and his fellow ward councillor Garry Peltzer Dunn were keen for the case to be solved.

They said that Sussex Freemasons had raised £400 from the friends of former Hove mayor Barry Sanders. The sheltered block is named after Mr Sanders.

But there was a reluctance to spend the money on replacements for the stolen items without being sure that proper steps had been taken to prevent a repeat.

Thompson was also charged with stealing meat worth £37 from Sainsbury’s, in Portland Road, Hove, nine days before Christmas.

He was remanded in custody to Lewes Crown Court on Wednesday 13 April.