The organisers of the Vitality Brighton Half Marathon have announced the 2017 race date – Sunday 26 February.

Event manager Dave Hill thanked everyone from the main corporate sponsor – the insurer Vitality – to the thousands who run the 13-mile course.

At a launch event hosted by the Grand hotel Mr Hill also thanked the hundreds of local running club and charity volunteers and other volunteers – such as first aiders – who help out on race day.

And he thanked staff from the Sussex Beacon who help organise the half marathon on top of their day job.

The half marathon is the main annual fundraiser for the Sussex Beacon, the Brighton care centre for people with HIV, AIDS and related conditions.

But it also raised £1.1 million for other charities, many of them local.

The 2017 event will be the 27th and the organisers hope to top the 13,000 registrations for the race which took place last month. About 250,000 people lined the course to watch and 9,000 runners finished. 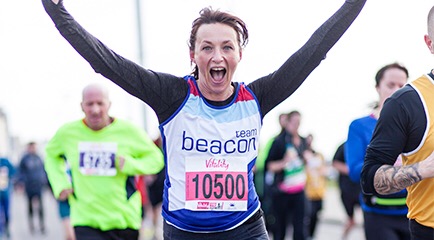 Sussex Beacon chief executive Simon Dowe said: “The Vitality Brighton Half Marathon is our biggest fundraising event and as such it’s very important to us.

“Outside London, Brighton has the highest incidence of HIV/AIDS.”

He said that this underlined the need for the half marathon, adding: “We need to raise £2 million a year.”

Mr Dowe said that he was also pleased at how the race had become a popular event in the running calendar.

Mr Hill thanked Brighton and Hove City Council for everything it did to ensure the race ran smoothly. Mayor Lynda Hyde represented the council at the launch event.

To find out more, including how to enter the main race, the mini mile for children or the corporate relay, visit www.brightonhalfmarathon.com.