Part of the North Laine is cordoned off this evening after police were called to reports of a knife fight in Trafalgar Street. 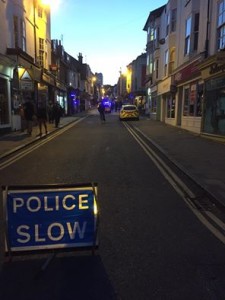 The fight between two men kicked off shortly before 8pm and one man has been taken to hospital with injuries to his ear.

Police are still at the scene and no arrests have yet been made. The police helicopter briefly circled the city but has not been specifically tasked to help with this incident.

A passer-by who saw the aftermath of the incident said police told her a Stanley knife was involved.

She said: “I was walking along Sydney Street and this homeless guy was sitting on a corner – he had his ear cut after having a fight with another guy who had a Stanley knife and slashed his ear up.

“The attacker ran off down Trafalgar Street and dropped a roll up mattress which had a Stanley knife fall out of it.” 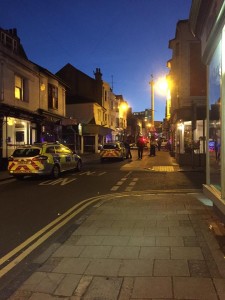 A police spokesman said: “We had a report of two males fighting in Trafalgar Street which came in at about 7.55pm.

“They were reported to have knives and one had been assaulted and was bleeding from the head.

“The helicopter was overhead just as routine but not specifically deployed for this.

“Police attended and a male with a cut to his ear has been taken to hospital.

“We are making enquiries to find the second male but are still on the scene. The area has been cordoned off.”