More needs to be done to support live music in Brighton, a panel heard today – but the council is able to offer little protection to the possibility new neighbours can shut down established venues with noise complaints. 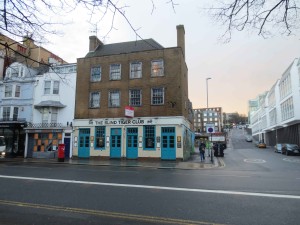 The Blind Tiger Club after it closed down

A special policy panel held in Brighton last week, called in the wake of the closure of the Freebutt and Blind Tiger venues after noise complaints, heard evidence from promoters, bands and venue managers, as well as council officers from the noise nuisance, planning and licensing team.

The cross-party panel, made up of Cllrs Joe Miller, Lizzie Deane and Peter Atkinson, heard how noise complaints and “excessive” licensing conditions are making it harder for live music venues to keep afloat by creating expensive hurdles to leap.

It heard that one venue, Brewdog, had taken the drastic step of buying the flats above to avoid the noise complaints which led to the closure of its predecessor Blind Tiger Club there two years ago – a move way beyond the means of most music venues which struggle to make ends meet.

But officers explained they were bound by national laws, and once a complaint had been made, it had to be investigated and, if appropriate, action taken.

He said: “There’s a certain amount of PR going on and venues are being painted as the bad guys.

“The venues are scared that you can close them down but they don’t know why. They have got no points of reference. Bands are now wary of how loud they’re playing.

“It’s the perception that the council doesn’t care about live music because it will look after itself. You should be shouting about it and how brilliant it is. I want this to be a music city.” 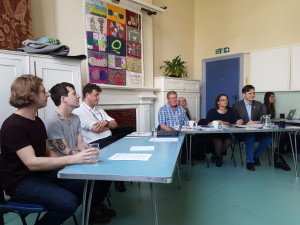 Steven Ansell from Brighton band Blood Red Shoes said smaller venues were essential to bands’ development. He said: “All the bands which play and blow your mind – that happens in small venues. There are venues which you don’t want to play because you’ll have to be too quiet.”

Sally Ann Oakenfold, who runs Sticky Mike’s Frog Bar in Middle Street and the Hope and Ruin in Queen’s Road, raised the issue of not being able to allow underage teenagers into gigs.

She said she had been told that if she wanted a licence for 14-year-olds to come into the pub, she would have had to agree to hire about four or five doormen for 150 people and not sell any alcohol to anyone, which would have made the evening prohibitively expensive.

She said: “There are lots of people who are 14 who play in bands and they can’t get the venues. The restrictions put on by licensing prevent children being able to do anything in these spaces.

“When people from licensing have a conversation, they assume that you want to fill your venue with 14-year-olds and get them drunk. I have got a 14-year-old myself and I would much rather she went to a venue where I know she’s safe and gets to see exciting new music, but that’s not an option at the moment.

“There’s a very young Brighton band called Grasshopper who have played Glastonbury. We’ve done risk assessments and let them play at the Hope and Ruin, but their friends can’t come and see them here.”

Simon Walker, operations director from InnBrighton, which runs pubs across the city, including the Hope and Ruin and Sticky Mike’s Frog Bar, said: “Communication is the key. Sort it out over a cup of tea. The image that all publicans are Phil Mitchell and if you complain we are going to kneecap you is not the case.”

He added that he had one mid-terrace pub where live music had become an issue after the house next door was converted into flats, meaning that a room which had previously been a lounge was now a bedroom.

Former manager of the Freebutt Andy Rossiter told how a single complaint about drum vibrations from a resident who shared a party wall with the venue had led to its closure.

He said council officers had been helpful in allowing their suggestion to try a series of small measures to mask the sound, but the assumption that silence from the neighbour after the first measure had worked proved disastrously wrong a few days before the noise abatement notice period was up.

The resident’s reluctance to allow noise specialists into their home had also hindered progress, but the council had stepped in and forced them to give access.

However, he said the council had accused him of attempting to bypass a noise limiter because although it worked to stop power to amplifiers over a certain level, the noise from the unplugged drum kit still exceeded the agreed decibel level.

He said: “It feels like the council officers are like tigers waiting to pounce on you and close you down. Anything the council can do to make it fell like a more supportive role rather than and aggressive role would be helpful.”

Various options to give more support to venues were floated, including a focus group, a night mayor and advice surgeries where music venue operators could come and discuss any issues they have.

However, Councillor Lizzie Deane said it was important not to minimise the effect rowdy venues can have on residents. She said: “There’s a sense [in some parts of the music scene] that if the residents weren’t there, it would all be fine, but from the residents’ point of view it’s very different.”

And council officers also spoke to explain that they were limited to working within the legal frameworks provided by national legislation.

Annie Sparkes, who runs the council’s noise enforcement team, said that on the whole, people who had problems with noisy bars tended to move away because they didn’t want official noise complaints showing up on property searches.

As a result, people now living in areas associated with noise, particularly the city centre, tended to be quite accepting of it and they received very few complaints from areas such as West Street or St James’s Street.

These were all done under the terms of the Environmental Protection Act 1990, which requires all complaints to be investigated.

She added: “It could be that it’s just one person affected because they’re on the party wall. We always say to people have you approached the venue, but you can’t force them.

“Acoustics are not an exact science and to provide effective sound insulation is not always easy in Brighton’s bungaroosh housing. People are also entitled to have their windows open.

“Sometimes we can get the sense from a complaint that whatever happens you cannot do an effective sound insulation job. We don’t encourage people to go and get expensive acoustic reports. We do warn people that it might be as simple as changing scheduling.

“Having thrash metal seven nights a week in a quiet neighbourhood is probably not what works in that venue.”

She also said that venues could appeal the notice, and would succeed if they could demonstrate that they had taken best practical means to mitigate the noise.

She said: “It isn’t just about us saying here’s a notice. And we can’t close down a premises.”

Planning officer Jonathan Puplett said that although issues about noise from surrounding venues should come up during the planning process and conditions attached to try and mitigate them, “we’re not going to go round and demolish developments because the mitigations have’t worked. It would be up to Annie’s team to investigate.”

The council’s senior lawyer Simon Court, who works with the noise enforcement team, said the council had never prosecuted a live music venue for noise nuisance or breach of licensing conditions in the 14 years he had worked there.

In relation to conditions requested by police for underage events, he said: “A number of young peopl are sexually abused in nightclubs they shouldn’t have been in and it’s that context that the police are particularly concerns about the implications of having young people in venues.

“They are the ones who are policing the city centre in the early hours of the morning. If your venue is in or near West Street then the odds are you’re probably going to require five or six bouncers. If you’re in Portslade, you will probably have more like one or two.”

He also cited a recent supreme court hearing regarding a speedway track near Coventry which has effectively closed down the track as a result of neighbours complaining.

He said: “If a neighbour decided to take any one of you to court the case law suggests they’re going to have a good job at taking you all the way to the Supreme Court.”

The panel’s findings will be written up in a report which will then be presented to the city council’s environment, transport and sustainability committee.