Club flags will fly from the council’s main offices, Kings House, on Hove seafront and at the two town halls of Brighton and Portslade until the promotion race is won. 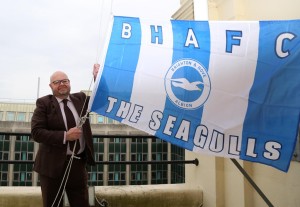 Council Leader Warren Morgan, a season ticket holder and lifelong Albion fan, said: “The club has called on the city and the county to go blue and white for the Albion.

“We are pleased to show our backing for Chris Hughton, Bruno and the lads as they take on Charlton, Derby and promotion rivals Middlesborough in the final three games of this amazing season.

“Of course when, and not if, our Premier League place is secured there will be a civic reception for the team just as there was in ‘79 for promotion to the top tier and ‘83 for the FA Cup Final. The whole city believes that this is our year and will be cheering the team on.”

Brighton and Hove Albion are currently third in the League Table just behind Middlesbrough and Burnley. With only three matches yet to play, the true goal of winning promotion is in sight.

Paul Barber, ‎Chief Executive at Brighton and Hove Albion Football Club, said: “We’re grateful for the support of Brighton and Hove City Council and all the residents of the city who are cheering us on in these crucial final weeks of the season.

“We hope to do the city proud and Chris Hughton and the team have been greatly encouraged by the support across the city.”

Premier League status is expected to give a huge boost to the city’s economy, with the raised profile of Brighton and Hove set to bring additional visitors and investment.

Brighton and Hove Albion will earn between £60 and £100 million from TV rights alone if promoted.