Plans go on show today for a £150 million housing and research centre scheme at Preston Barracks which is expected to create more than 1,000 jobs.

The scheme – known as Momentum Lewes Road – will attract more than £500 million into the local economy, according estimates from those behind the plans.

As well as 350 new homes on the old Army barracks site, the project will modernise Brighton University’s Moulsecoomb campus.

A key part of the scheme is the creation of a Central Research Laboratory in a former Territorial Army (TA) building on the 10-acre site.

The 50,000 sq ft lab will act as an incubator for hi-tech and design-led manufacturing start-ups and entrepreneurs. It has attracted a £7.7 million grant from the Coast to Capital Local Enterprise Partnership. 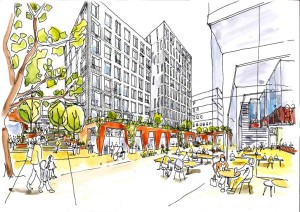 It comes as Sussex University draws up plans for its own £60 million bio-innovation centre at Falmer to harness expertise in life sciences, pharmaceuticals and medical technology.

The Momentum plans – drawn up by developer U+I and Brighton University – go on show at Field House, on the Preston Barracks site, in Lewes Road, from noon today (Friday 22 April).

The exhibition is taking place from noon to 8pm today and 10am to 4pm tomorrow (Saturday 23 April).

There will be another chance to see an exhibition of the plans, in Churchill Square, Brighton, by JD Sports, from 10am to 6pm next Friday (29 April) and on Saturday 30 April.

They will also be shared with the Coombe Road Local Action Team on Monday (25 April) from 6.30pm to 8pm at Field House.

The developer aims to submit a planning application to Brighton and Hove City Council later this year. It will cover the Preston Barracks site and two Brighton University car parks on either side of Lewes Road, by the Watts Building and Mithras House.

Richard Upton, from U+I PLC, said: “The partnership aims to create a new place that is lively and bursting with creative energy, delivering a wonderful place to live, work and learn. 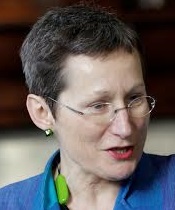 “This major development will act as a marker to the city from the north while contributing a vibrant new place with a melting pot of uses which will complement the existing community.”

“Small independent retail units, workshops and cafés will be provided at street level and new routes will be created to provide better connectivity from neighbouring residential streets to the Lewes Road and Moulsecoomb Railway Station.

“There will be a new home for the university’s Brighton Business School along with new teaching and learning facilities.

“The scheme as a whole will deliver around 1,300 student bedrooms at Preston Barracks and on the Mithras House car park, ensuring provision of quality, managed accommodation for students at the university and taking the pressure off private rented accommodation.

“All existing university parking spaces will be replaced by a multi-storey car park on the Watts car park site and there will be additional car parking at Preston Barracks to serve the new residential and business uses.

“Addressing a detailed brief for development by Brighton and Hove City Council and working with award-winning architects Studio Egret West and Hassell, this employment-led regeneration scheme will create an estimated 1,065 new jobs and contribute £511.28 million to the city’s economy over the next ten years.

“The university and U+I have an established working relationship that dates back to 2006 and have worked closely, alongside Brighton & Hove City Council, on the development now under way at Circus Street in Brighton city centre, adjacent to the university’s Grand Parade campus.”

Council leader Warren Morgan said: “Preston Barracks has been on the drawing board for 14 years and it is a key site for new affordable housing for local people, jobs and growth.

“The City Plan envisages a joined up approach should be taken to development along the Lewes Road so it’s great that we are working in partnership with U+I and the University of Brighton to drive forward this much-needed regeneration.”

Brighton University vice-chancellor Debra Humphris said: “We see this as a great opportunity to improve the facilities we have for our students and staff as well as to open up our sites on the Lewes Road to the local community.”

Professor Humphris added: “This is a very exciting proposal for the city and for the university – one which will create an open and attractive location which generates jobs, brings economic benefit to the city and will reduce pressure on the private housing market.”