Do you recognise Portslade theft suspect?

An elderly woman had cash stolen while she was at a newsagents in Portslade, prompting police to release a CCTV picture of their prime suspect in the case.

Sussex Police said: “Police have released an image of a man wanted in connection with the theft of cash at a newsagents in Portslade. 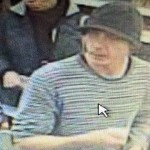 “Shortly after 1pm on Friday 22 April an elderly woman was at the counter in Rishi News, in South Street, when she became distracted by a young child.

“She later realised her purse was missing and, upon returning to the store to collect it, she discovered £60 in cash was missing.

“The suspect is described as a white man in his thirties, wearing a black hat and a striped t-shirt or jumper.”

Anyone with any information is asked to phone Sussex Police on 101 or email 101@sussex.pnn.police.uk.