Employees at a Brighton call centre have picked the sick children’s charity Rockinghorse as their staff charity for the second year running.

Staff at Domestic and General (D&G), in Queen Square, Brighton, also handed over a cheque for more than £7,500 raised during the past year.

D&G said that more than 900 people working at the Brighton contact centre took part in the vote to choose their charity of the year. Rockinghorse was the overwhelming winner. 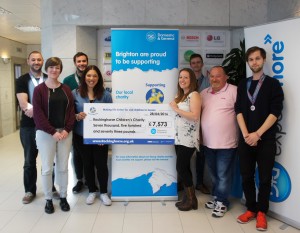 Domestic and General staff hand over £7,500 to the Rockinghorse sick children’s charity

UK customer service director Craig White said: “It’s become clear that many of our employees have a personal affiliation with Rockinghorse – either through experiences with their own children, personally when growing up or through friends, family or colleagues who’ve been supported through the charity’s work.

“The cause is so close to many of our hearts that it felt only right to include Rockinghorse in this year’s local charity shortlist. The result of the employee vote speaks for itself.”

In the past year, through events such as Paddle Round the Pier, the Santa Dash and the Brighton Christmas Light Switch On, D&G staff raised £7,573 for the charity.

Employees also gave their time in volunteering and the company donated a number of appliances to the respite facilities at the Royal Alexandra Children’s Hospital and Ronald McDonald House.

Rockinghorse head of fundraising Analiese Doctrove said: “We are delighted to have been chosen as Domestic and General’s local charity of the year for the second time.

“Through their fabulous fundraising efforts they have already donated over £7,000 and also gave us an extensive amount of volunteering hours to help us raise vital funds at our local events.

“To be able to continue to build upon this relationship as their chosen charity in 2016-17 really is wonderful news.

“The partnership is really important to us. The support of Domestic and General and its employees really does make a huge difference.”

Rockinghorse is the official fundraising arm of the Royal Alex and also supports the Trevor Mann Baby Unit.

The charity raises money for life-saving and cutting-edge medical equipment while ensuring that children are treated in an environment that is better suited to their needs. It has been supporting children in Brighton for nearly 50 years.

The organisation doesn’t receive any government funding so relies on the support of individuals, community groups, companies and trusts.