Brighton and Hove firefighters were called out to a kitchen fire and three bin fires last night. 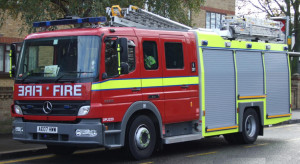 The busy night began at 7.20pm when crews from Hove and Preston Circus were despatched to a small fire in the first floor kitchenette of a house in Tisbury Road, Hove.

Firefighters used a heavy duty fan to disperse the smoke.

Then at 11.15pm, a wheelie bin was set on fire in Sussex Street, Brighton. A crew from Preston Park used a hose reel to put out the small fire, which it’s believed was started deliberately.

Less than an hour later, at 12.05am, Preston Circus firefighters were called out to another Brighton bin fire, this time in an industrial bin on the Lower Parade, Grand Junction Road.

A hose reel jet was used to put out the fire, which it’s believed was started accidentally.

Finally, at 2.10am a crew from Preston Circus was sent to its third bin fire of the night, at the Old Steine at 2.10am. Crews used one hose reel jet to extinguish the fire, which it is believed was started deliberately.