This was the scene at a Brighton primary school this morning after a car careered off the road and smashed a gaping hole in the wall. 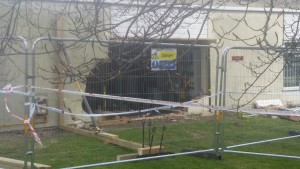 Emergency services were called to Carden Primary School at 5.20am to reports a vehicle had crashed into the school.

Both police and fire attended, with police cars and a fire engine still on the scene well into mid-morning.

By lunchtime, the wall had been cordoned off with metal security fences.

A police spokeswoman said there were no injuries and no arrests. One person failed to provide a breath sample and as a result blood was taken instead.

Southern Gas Networks were called as a precaution as the damaged wall was near to a gas pipe. However, no homes were evacuated.