A Brighton school hosted a Question Time style debate this week with an MP, former MP, two students and its very own Dimbleby in the chair. 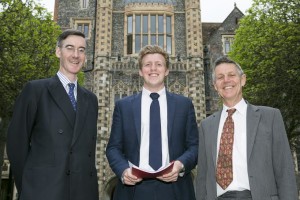 Brighton College said that it hosted the “Brexit” debate to help its own and other local schools’ sixth-formers learn more about the subject.

The school said that Fred did his parents and his illustrious family name proud, with his mother Belinda and father both in the audience.

Not only is his father the long-serving presenter of Question Time but his uncle Jonathan presents a similar panel programme, Any Questions, on BBC Radio 4. And grandfather Richard Dimbleby was the BBC’s first war correspondent. 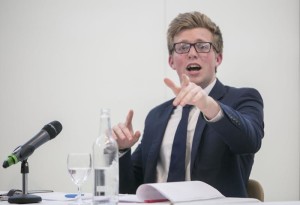 Fred said: “I was pretty nervous before the debate started and both Mr Rees-Mogg and Mr Parris are very eloquent speakers and very experienced at this sort of event.

“I didn’t want to make a hash of it. But once it got going, I absolutely loved it.

“I would love to make a career in political journalism but I am not quite sure whether I would like to go into TV journalism. I’m more into podcasting which is big in the US but hasn’t crossed over here as much yet.”

Mr Rees-Mogg said: “Fred did a great job and I think his dad was very proud of him.”

Mr Parris said: “I think the sixth formers were more impressive than some of the people on the actual Question Time!”