A drunk man has been caught on camera peeing from the rooftops of a Brighton student house, to the horror of onlooking neighbours. 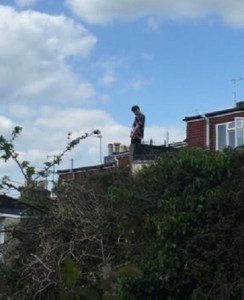 The young man was pictured on Saturday afternoon taking a leak from the flat roof of a house in Bernard Road, off Elm Grove.

However, although he and his friends appeared to think his actions were funny at the time, his hosts have been told they are to be fined by their lettings agency and a report has been made to Sussex Police for indecent exposure, with the force taking the complaint seriously.

And the young man, who was visiting friends who live in the student house, says he is “disgusted and ashamed” – although he cannot remember doing it.

One disgusted neighbour said: “I was in the garden with my little ones and I looked up and there he was.

“I asked him what he was doing, and he told me it’s alright, and then someone popped his head out of the window and said he’s just drunk, he can’t help it.

“If he’s that drunk, he shouldn’t be up on the roof, but what really annoyed me was that they were saying it’s okay, he’s drunk and therefore he’s allowed to do it.”

He added that as the weather is getting nicer, groups of students were beginning to gather on the asphalt roofs of this student house and the one next door to drink.

He said: “When there’s up to 15 of them out there and they’re so loud, it’s like they’re in your house.

“They’re looking down on you – I have got a 12-year-old daughter who has to close the curtains because she feels people are looking in.”

Brighton and Hove News tracked down the young man, who said he could not remember the incident.

He said: “In all honesty I have no recollection of doing it but I was told by my friends that I did. If that’s the case then I’m truly disgusted and embarrassed with myself.”

One of the students who lives in the house explained that she had pleaded with the young man not to wee off the roof.

She said: “I told him don’t you dare, there are families living there, but he went against us.

“The wee didn’t go into anyone else’s garden, it just went over our conservatory.”

A police spokesman said: “Police were called after a man was spotted urinating from a roof in Bernard Road, Brighton, on Saturday afternoon (May 14).

“The man was photographed and enquiries have been made with the occupants and letting agents of the property in a bid to identify him.”