A young Hove woman bravely stood up to a masked teenage robber who pointed a gun at her and demanded her car keys yesterday afternoon. 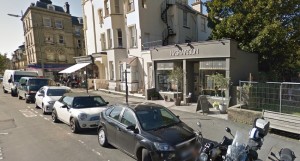 The incident happened at around 2pm outside Nash Watsons estate agents in Wilbury Road, Hove.

The woman, 23, refused to part with her keys and the boy ran off empty-handed along the B2066 Church Road and into The Drive.

Armed officers were among police who searched the area in an effort to trace the offender, but he had disappeared.

He is described as around 17 years old, white, 5ft 8in, skinny, with a local accent. He was wearing a blue and white hooded jacket or tracksuit top and a black scarf masking his face.

Detective Sergeant Cheryl Lewendon, of Brighton CID, said: “This appears to have been a spontaneous, isolated incident and no one was hurt.

“However, we’re clearly concerned that some sort of weapon was involved and would ask anyone who saw what happened or noticed a young man acting suspiciously to contact us without delay.”