Waiting for an ambulance? It may be in a queue at A&E

Patients risk being kept waiting for an ambulance after dialling 999 because so many of them are waiting outside hospital accident and emergency (A&E) departments.

Ambulance chiefs – from the South East Coast Ambulance Service (Secamb) – met Brighton hospital bosses in the spring after 19 ambulances were waiting to hand over patients at one point.

A report to members of Brighton and Hove City Council said: “Between April 2015 and March 2016, almost 18,000 hours have been lost to ambulance handover and turnaround delays at Sussex acute hospitals.”

The report, to the Health Overview and Scrutiny Committee, said: “Across Sussex the number of hours lost to delays was 46 per cent higher than the equivalent period in 2013-14.

“Locally, there have been increases in hours lost of 35 per cent and 91 per cent at the Royal Sussex County Hospital and Princess Royal Hospital sites respectively.

“Delays to patient handover give rise to significant concerns including

“Despite some easing of the system in recent weeks, ambulance handover and turnaround delays remain a very significant challenge.”

The report, to be discussed this afternoon (Wednesday 25 May) added that, across Sussex, there was not a single factor or cause for the delays but a range of contributory factors including

After the meeting in the spring between ambulance bosses and Brighton hospital chiefs, a 30-minute handover time was agreed.

But a senior official at Secamb said: “It’s never been enforced.

“We have huge sympathy for BSUH (Brighton and Sussex University Hospitals NHS Trust) but it is for the commissioners to resolve.

“There was an agreement made earlier this year that 30 minutes will be the absolute longest anyone waits in an ambulance or in a corridor before handover but it has not been implemented by the CCG.

“We’re very supportive of the hospital but the government’s four-hour target (to be seen in A&E) distorts the system.”

He said that no politician had the courage to tackle the problem, adding: “It’s a simplistic target without any proper nuancing.”

As a result, he said, some patients with less serious conditions were seen within the four-hour target. At the same, when A&E was at its busiest, some patients in genuine need of urgent treatment were not receiving it as quickly as they should. 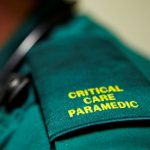 He added: “Because our paramedics are very good and highly qualified, they (A&E staff) trust them so patients are being left in the back of ambulances.

“It’s not fair on our guys or on patients.”

The report to councillors said: “The performance in terms of handover and turnaround delays continues to deteriorate and the expected improvements have not yet been delivered.

“While improvements to quality and process efficiency have been agreed at each major hospital site, on their own they are not sufficient to drive down the level of patient handover delays.

“Progress during November and December 2015 at the Royal Sussex County site, and more recently the good performance delivered across Sussex during the period of junior doctor industrial action, demonstrate that improvement can be delivered swiftly through a combination of effective planning and sufficient resource escalation.

“The challenge is to ensure this improvement is delivered consistently during ‘business as usual’.

“If this can be achieved, there will be significant benefits for patient experience and reduced clinical risk through faster access to acute hospital care and additional capacity being available to respond to new 999 emergencies as they arise.”