Brighton-born secret agents to be honoured

Plans to honour four Brighton-born secret agents were announced on what would have been the 100th birthday of one of them, Jacqueline Nearne.

The initiative, which includes unveiling blue plaques, was announced by the Sussex educational charity the Secret WW2 Learning Network.

He described her as one of the bravest daughters of Brighton and Hove who was made an MBE at home and awarded the French Croix de Guerre for her wartime role.

She worked for the French section of the Special Operations Executive (SOE) which was set up by wartime Prime Minister Winston Churchill to support resistance in occupied countries. 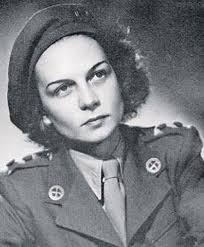 The Secret WW2 Learning Network said that it was working with several partners and funders to develop a wide-ranging programme of public events in November.

These would accompany the unveilings of commemorative plaques in honour of

The first three served in the SOE in France while Captain Taylor served in Italy with its resisting partisans. Captain Trotobas was killed in action but the others survived their missions.

The Secret WW2 Learning Network has been working with the Brighton and Hove Commemorative Plaque Panel and said: “The blue plaques themselves will provide lasting recognition in Brighton and Hove of the courage, ingenuity and resilience of these four wartime secret agents while working ‘behind the lines’ in occupied Europe.

“November’s special events and initiatives, including talks, films, books, exhibits and special schools projects, will ensure that the local population and also visitors to the city will have every opportunity to learn not only about these agents’ individual exploits but also the wider contexts of why and how they served their country in this way.”

The Secret WW2 Learning Network first gained support and funding for this ambitious initiative via its existing relationship with the Resistance Studies Network at Sussex University.

The additional partners, venues and supporters already coming on board include the Brighton Dome, Brighton Pavilion, the Old Ship Hotel, City Books and Uniform Press.

The exploits of the four agents are to be featured in a book to be published in time for the unveiling of the blue plaques.

Brighton’s Secret Agents is currently being completed by a trustee of the charity, Paul McCue, a military and special forces author.

His book will also give pen portraits of other SOE agents, an RAF pilot who flew them in and out of France and a back-room supply specialist who later became the inspiration for Q in the James Bond films.

They also had links with Brighton and Hove, mostly via their schooling, and several were killed or were executed during active service.