A Brighton pensioner refused to let a suspected doorstep conman come into her home.

She was able to give a good enough description for Sussex Police to issue an efit picture of a man they would like to interview about the incident.

The force said: “Police have issued an e-fit of a man they want to speak to in connection with an attempted distraction burglary in Brighton.

“The man called at the home of an elderly woman in Whitehawk Crescent around 12.40pm on Tuesday 26 April.

“He claimed to have come from the council’s contractors to replace a back door but he did not show identification and was not wearing the company clothing. 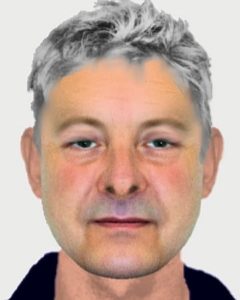 “He was refused entry and left, driving off in a silver Transit-type van that was signwritten with the word ‘Enterprise’.

“He is described as white, in his late 50s, of stocky build, clean shaven with short grey hair. He wore a navy jumper with white writing on it, light blue jeans and trainers. He spoke with a local accent and carried a clipboard.”

Detective Constable Paul Candy said: “We now know from local house-to-house inquiries that a man of a different description called on a neighbour the previous day asking if they wanted any work done and he left quickly when told no.

“A fortnight previously, another man in a van with ‘Enterprise’ on it called at the same house asking to read the electricity meter. He wasn’t let in and left.

“Fortunately, on this occasion, the homeowner had her daughter with her and they became suspicious as they were aware of what the council contractor’s staff usually wear when working and know their company vans.

“We want to find out who this man is.

“If you recognise our efit or you have any more information about this or similar incidents, please email 101@sussex.pnn.police.uk or call 101.

“Alternatively, you can contact the independent charity Crimestoppers anonymously on 0800 555111.

“If someone does call on you and you are not expecting them, make sure they are who they say they are and don’t let them in without them confirming their identification.

“Any genuine caller will not mind waiting while you call their employer to check but be sure that you are calling a number from a utility bill or similar.

“Don’t use a number that they might give you, especially a mobile.

“If you are suspicious, don’t let them in and dial 999 immediately.”