The death of a Brighton patient who missed an appointment for a scan days earlier has prompted fresh questions for the non-emergency ambulance contractor Coperforma.

Campaign group Sussex Defend the NHS that the man, who was in his eighties, died at the weekend, adding: “The family are understandably furious and are left wondering whether the outcome would have been different if the ambulance had taken him to the hospital as booked.”

Coperforma said that an investigation into what happened was now under way. Details of the pensioner’s case were being shared as local health chiefs and Coperforma met MPs at Westminster.

The clinical commissioning groups (CCGs) have given Coperforma until mid July to improve its performance in providing the patient transport service.

The company is currently missing too many appointments and turning up late for others. Although it provides a non-emergency ambulance service, patients are said to be at risk if, for example, they are on dialysis.

The Labour MP for Hove, Peter Kyle, praised the GMB union for speaking up on behalf of staff and patients and for raising safety concerns.

Simon Kirby, the Conservative MP for Brighton Kemptown, said that he had received many complaints from constituents about the service since Coperforma took over the contact in April.

He said: “Sussex MPs were very concerned as, two months on, constituents were still contacting them about missing operations, hospital appointments and waiting for hours in hospital reception areas to return home due to patient transport problems.

“CCG senior managers told MPs that they have been working closely with Coperforma to establish the cause of the problems since taking over patient transport for Sussex in April.

“They are currently awaiting the results of an independent report to investigate the handover problems.

“However, they also recognise that urgent action is needed and have already agreed an improvement plan with Coperforma which is being reviewed on a weekly basis.

“The CCG has demanded that Coperforma reaches their target of ensuring that 95 per cent of patients are transported to and from appointments on time by the end of June.

“They are also already consulting with all Sussex CCGs and providers on possible alternative plans should Coperforma not reach this target.

“I am pleased that the CCGs and Coperforma agreed to this meeting with Sussex MPs which was very productive. I am looking forward to seeing an improvement to the service and to meeting again at the beginning of July.”

The company itself said: “Coperforma welcomed the opportunity to meet with Sussex MPs and CCGs to provide insight into the patient transport service it is delivering and to share information on the progress that is being made.

“While stretching targets have been set which need to be met by early July, Coperforma is confident of meeting those targets and is investing in additional resources at its own expense including further vehicles and crews that will deliver up to 84 extra shifts in June and July to meet the uplift in demand that the company is experiencing.

“Coperforma looks forward to continuing its collaboration with the CCGs to monitor that improvement and to providing all data required and requested.

“Coperforma thanks the MPs and the CCGs for a positive and supportive meeting that will enable more information to be shared with patients and constituents.

“An investigation is under way into the precise circumstances surrounding the transport service experienced by this patient and his family.

“A report will be sent direct to the family once that is complete. Coperforma extends its sympathy to the family at this very sad time.”

Sussex Defend the NHS said: “The patient concerned suffered from a respiratory illness and was struggling to breathe. 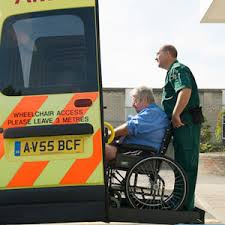 “His son said that when the transport failed to arrive for his hospital scan appointment, his dad phoned his GP who visited immediately.

“The doctor was furious that the service hadn’t turned up and contacted them there and then to find out what was happening.

“The patient did not get to hospital for the scan and a few days later an emergency ambulance had to be called to take him to hospital where he was treated.

“Sadly, his condition had deteriorated by this time beyond the point of recovery.

“The family made a complaint to Coperforma, the private company who run the patient transport service.

“They were told that the driver who didn’t turn up ‘had walked out’ and had ‘let the company down’.

“The family also told us that their dad’s carer had written in visit notes, after the missed appointment, that her client was in a terrible state and extremely distressed because his transport hadn’t arrived for the CT scan.

“The family now know their dad was very ill so the outcome might well have been the same.

“However, if he had made that planned appointment he would have received medical care and what turned out to be his last few days would have been more comfortable.”

Val Knight, from Sussex Defend the NHS and a neighbour of the patient, said that she had been watching out for him in recent weeks.

She said: “This makes me so angry. The distress caused to an elderly, disabled person and the suffering in their final days is utterly unacceptable.

“And we are all left wondering if the outcome would have been different if he had been taken for the scan he was booked in for.

“Those who commissioned this company are still just talking about what to do.

“Until they get rid of Coperforma and go back to Secamb (South East Coast Ambulance Service), who used to run the service reliably, this can happen again and again.

“I want our health and social care services run for the public who pay for it, not for faceless profiteers.”